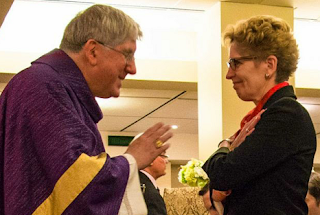 Blogger Lou Iacobelli recently blogged on the CCCB's announcement that the Vatican has chosen four Canadian Bishops who will attend the Synod of the Family in October. He shares the announcement in the context of the current battle in Ontario between parents and Premier Kathleen Wynne's Sex Ed plans for the fall of 2015.


The fact that the Vatican has chosen four Canadian bishops to attend the Synod of the Family is of little comfort to parents battling in a number of provinces educational policies and government laws that undermine Catholic teaching. This is bad enough. However, when the Canadian Conference of Catholic Bishops (CCCB) fails to publicly stand up against anti-Catholic thinking and governing it makes the situation even worse.

School board trustees in the province have had no say regarding the proposed new curriculum. Unless major changes are made, Catholic trustees should reject the curriculum because it contradicts the teaching of the Church on human sexuality, the family and marriage. Catholic teachers have the right to refuse to teach the curriculum and Catholic parents have the right to outright reject it. Our children must be physically, spiritually and morally protected.

From the comments section of the above posting comes a link to another very interesting entry by Iacobelli on the failure of Bishops to take appropriate action. Worth the read.

From all reports it appears that Cardinal Thomas Collins is meekly going along with Wynne`s sex-ed plans and is even stonewalling those in his flock who are sufficiently exercised to speak out. So much for Vatican II and the voice of the laity. To top it all off, we hear the general secretary of  the Ontario bishops’ conference has been actively supporting Wynne’s child abusive sex-ed program. And we wonder why there is so much indifference in the Catholic community.

But couldn`t Cardinal Collins do something about the Wynne sex-ed scandal? Of course he could, if he had the will and the courage. He has authority from God to bind spiritual powers (demons) on earth. But he clearly lacks the faith in God to exercise that authority. Perhaps if the 70,000 Catholic parents who had the courage to protest in public over Wynne`s pet project had instead camped out in front of the Cardinal`s residence, loudly insisting on his favorable intervention, His Eminence might have received a reminder of his weighty role as a Successor to the Apostles. But alas, these days Catholics themselves have little faith in such a notion.