Unfortunately cultural bias in the Canada of 2016 is decidedly against traditional Christian morality, in particular pro-life and pro-family witness. In this posting I share the content of recent letters to the Durham Regional Police Services Chief and the Chief’s response. The letters speak for themselves but I will preface each letter with a short intro. I make public this correspondence for the sake of transparency in law enforcement, for the advancement of freedom of speech and expression and for the greater good of the pro-life community.

I look forward to the readers’ comments and reactions to these letters.

Intro: On May 28, 2016 I was displaying signs in Oshawa at Taunton Rd. and Harmony Rd. intersection as I often do on Saturdays. On one side of my sign was a graphic abortion image and on the other a related text message for passers-by.

I am a resident of Oshawa, ON. I am a former high school teacher and a retired pastor.

On Saturday May 28, 2016 I had an encounter with one of your officers in Durham Regional Police Service; or rather I should perhaps say the Durham Region Thought Police. I have video and audio on file of this encounter. Officer Lee, a motorcycle patrolman, conducted an extensive inquisition into my activity at Harmony and Taunton Roads, sometime around 2 pm, while I was holding an anti-abortion sign at that intersection. Mine was a completely innocuous law abiding exercise, although the sign, one which I have used for several years, was of a graphic nature. Graphic pictures of abortion evince a strong response from some individuals of the public, as they rightly should, since they portray the results of a bloody violent act against a fellow human being.

Officer Lee approached me asking what’s up and proceeded to inform me that my sign was very graphic and asking why I was on the street corner with such a sign, inferring that I was engaged in doing something wrong. I informed Officer Lee immediately of my Charter rights in regard to freedom of expression and asked him what, if anything, I was doing contrary to the law, but it made little difference to his modus operandi, which, throughout the encounter, essentially consisted of harassing me with his opinions and point of view. He immediately insisted that I produce identification, without even providing just cause for his intervention.  I told him I was reluctant to lay down my sign in order to get ID from my car because I’d been through this routine before and it served no good purpose but he was adamant and so I complied and went to my car while he accompanied me.

From that point onward a discussion ensued wherein Officer Lee lectured me on why I shouldn’t be exposing others, particularly children, to such images. His opinion was clearly favoring the so called right of “Choice” i.e. the choice of women to kill their pre-born children and when I countered with my opinion he kept insisting that “it all depends on what you believe…what you feel.” So apparently Officer Lee’s opinion took precedence in the matter and he was determined to press that opinion as far as he could, against my protestations. Then followed a host of questions about how many other times had I been stopped by officers in the past, why did I feel so strongly about the issue that I would hold a sign at this street corner, had someone in my family been affected somehow by abortion, why is abortion a personal issue for me, why don’t I protest instead outside an abortion clinic (Officer Lee recommended that as a better choice!), etc. During the questioning I kept reminding him that he was violating my Charter rights but he simply dismissed my protests with comments such as “How, by talking to you?”

After he had run out of questions and excuses he finally said, “I’m going to read your sign before I let you continue.” The other side of my sign had some text referring to Canada’s evil culture and again, Officer Lee was making it sound as though my right to say such things was in question. We walked back to my sign and then he started to write in his notes the words that were on my sign, interrogating me all the while on my meaning. I offered to email him a copy of the text on the sign but he declined the offer, continuing the interrogation as he went down the list of items on my sign. Clearly this was pure intimidation and animus. He never let up first nor last on forcing his opinions upon me, availing himself of every opportunity to demean or contradict the message I was delivering. At no time did I solicit his comments or his opinions, rather I tried unsuccessfully to have him leave me alone and allow me to get back to my business at hand. I protested, “I have a different opinion Officer and I’m allowed to have it. We’re not living in North Korea or in Russia…” Eventually Officer Lee could avoid the question of the law and my rights no longer, although he never conceded at any point that he was overstepping his bounds, and when I finally  insisted “Am I free to go now, Sir?” he replied “Oh, I’m not stopping you…”

What outrageous behaviour for a professional in the service of the public! But that wasn’t the end of it. He went on to take a cell phone picture of the graphic photo on my sign and then interrogated me on where exactly I had obtained that photo, i.e. the source from which I purchased it. I answered his question precisely, wished him a good day and returned to my sign duty.

On July 7, 2015, a little less than a year ago, the Kingston police issued a statement on Facebook and Twitter regarding pro-life sign protests happening in their city at the time (see media story attached to this letter). This was their message to the public:

We are receiving numerous calls regarding “Pro-life” or “Anti-Abortion” protests happening around the city. We are aware of the activity, and the graphic nature of the images on display. To this end, we have sought a legal opinion from the Kingston Crown Attorney, which advises that this conduct is not an offence under law, and is protected by the Charter of Rights and Freedoms, specifically freedom of expression. We are aware that some may find these protests offensive, but we would kindly ask that you refrain from calling police to report.

A few years ago I was engaged in a perfectly peaceful and lawful pro-life activity in another city in Canada when I was seriously hampered and harassed by police officers without cause. I was strongly advised to file a human rights complaint against the police. I did not do so at the time and it would be a sad day for Durham Region, for Ontario and for Canada should I have to do so the next time a Durham Regional police officer misuses his authority and position.

Chief Martin, I trust that you will do everything in your power to ensure your officers are fully informed of the law regarding this type of demonstration and that they respect the rights of all law abiding citizens to express themselves, whether officers are in agreement or not. It’s simply the only professional response acceptable and it should be the only one tolerated.

Info: By mid-September I still had not received an acknowledgement or response from the Chief of Police. For reasons stated in the second letter below I decided to write again. On this occasion I sent copies to other individuals listed.

RE: My Previous Letter Of June 14, 2016 Remains Unanswered

I refer to my previous letter of June 14, 2016, copy attached, which remains unanswered to date, more than ninety days later. The letter demanded time and effort on my part and the incident which it described was quite unsettling and frustrating. Should it be altogether dismissed or unworthy of so much as a form letter by return mail? Although I did not specifically request a response, I certainly hoped to receive an acknowledgement of the same and at least a comment or two, perhaps offering some perspective on my concerns. My letter was hand delivered to a female staff person at your office reception desk.

I assume you received my letter but of course, without receipt of a reply, I cannot be certain. I therefore feel compelled to write this follow-up correspondence. I cannot help thinking that, had I been a member of the LGBTQ community who was reporting an instance of unjust discrimination or interference by a DRPS officer, my concerns would certainly have merited a quick reply of support and encouragement. Isn’t that what outreach activities relating to diversity and inclusion would mandate?  Am I or my politically incorrect cause to be excluded from the conversation exploring all the “dimensions of our diverse Region”? Is political correctness blinding us to the concerns of fellow Canadians? I can’t help but wonder.


Info: The following is a jpeg of the police chief’s response of October 5th. I was appreciative of the fact that he finally went on record with a response although it seems to me that he skirted altogether the facts of the matter and the concerns I voiced. 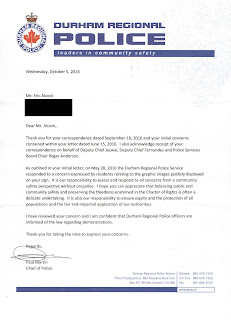 This is hardly the first time such bias showed up at my doorstep. However, there have been exceptions, this posting has further details. 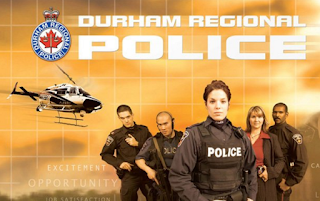