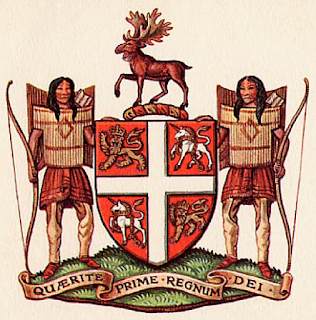 Yes, once upon a time, it was believed that grand thoughts of the Christian God and Saviour, as well as the Words He left us, were the stuff and substance on which to build a new land…a New Found Land.

Somehow, some way, some time, that must be recovered, or we (the West) fade from the scene.

The NL coat of arms is one of the oldest in Canada, second only to that of Nova Scotia.

The arms consist of a red shield divided in four parts by a silver cross, with lions and unicorns in the quarters. The cross is similar to one that appears on the arms of the Knights of St. John the Baptist, and probably refers to the old legend that John Cabot sighted Newfoundland on the saint’s feast day (June 24) in 1497.

The two supporters standing on either side of the shield are fanciful 17th-century English interpretations of Newfoundland’s Native peoples, the Beothuk

Written on a scroll at the bottom of the shield is the motto “Quaerite Prime Regnum Dei”, which translates from the Latin as “Seek ye first the kingdom of God.”