In Darkest Canada And The Way Out 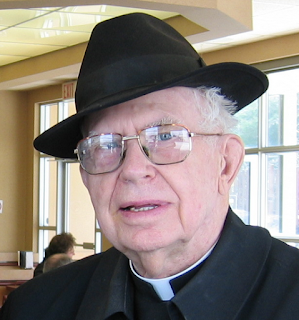 Is Msgr. Vincent Foy the only honest senior cleric in Canada?

Msgr. Foy, a retired priest and canon lawyer of the Archdiocese of Toronto, was born in Toronto in 1915. Over these last fifty years of moral and doctrinal chaos in the Church in Canada he has fearlessly defended the teachings of the Magisterium and pointed the path to fidelity for all to tread. Many of my blog postings over the years have referenced his articles and dogged determination.

A few days ago Msgr. Foy completed a brilliant and comprehensive landmark posting on his blog entitled Saving the Church, which included the following preface:

At the present time, in many countries the Church is in grave danger because of the contraceptive mentality and many other evils. To save the Church, many reforms are necessary. I am listing some suggestions for this purpose.

He then proceeds under several headings, such as "Build a Culture of Life", Revive Parishes", "Provide Authentic Liturgy and Sacred Architecture", "Be Faithful and Orthodox" to identify the painful failures of the hierarchy and to unfold his suggested plan to save the Church.

There is no other way to say this:

No other senior Canadian cleric and, in particular, no Bishop, has accurately diagnosed the disease and prescribed the radical remedy for the pseudo-Catholic culture entrenched in Canada's society over this past half-century as has Msgr. Vincent Foy.

Considering the depth of the crisis implied and the role every Catholic Bishop must actively play to sustain it Msgr. Foy's shocking assessment is tantamount to declaring a wilful and wholesale apostasy of an entire generation or more of senior Catholic leaders in our nation. Such a charge calls into question the honesty and integrity of virtually every Catholic Bishop in Canada. Is there even one diocese in Canada where the faithful are exposed to anything resembling Msgr. Foy's remedy?

When will Catholics be outraged enough to adopt a sufficiently militant approach? After all, they have been deceitfully robbed, through a thousand lies, of their religion.