The Catholic Church of Nice is Dying On The Vine

Pat Robertson Gets A Smack Down on Contraception

Ouch! Pat Robertson stepped into the hot subject of contraception recently. Michael Voris sets the record straight and takes advantage of the situation to expose a major weakness of Protestantism.

Question: "Since Billy Graham Is Not Catholic, Do You Believe He Will Be Saved?" 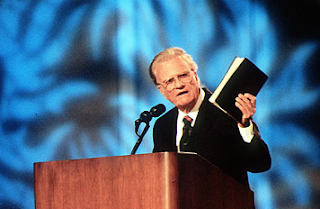 Very interesting question there about Billy Graham being saved or not.  But, even though it is an interesting question, it is the wrong question to be asking.  I understand that we, as Catholics, can look around us and see many Baptists, Evangelicals, Presbyterians, Lutherans, and so on who, from all appearances, seem to be sincere and devout followers of Christ in accord with the teachings of Christ as they understand them.  They go to church every Sunday, and many every Wednesday, too.  They read their Bibles, they seem to love their families, they volunteer at various charities that help the poor and the oppressed...they just seem like all-around good folks.  But, what we need to remember, just as it is not within our authority to condemn anyone to Hell, so it is not within our authority to canonize anyone as a saint of Heaven, either.

No matter how good someone may seem on the outside to us, we have absolutely no way of judging the interior of their heart - that is the province of God, and God alone.  When speaking about judgment, particularly about his judgment, St. Paul said, “I am not aware of anything against myself, but I am not thereby acquitted.  It is the Lord who judges me.  Therefore do not pronounce judgment before the time, before the Lord comes, who will bring to light the things now hidden in darkness and will disclose the purposes of the heart,” (1 Cor 4:4-5).

St. Paul did not even judge himself, because he recognized that it is the Lord’s place to judge man - good or bad - not man’s place.  I want to expand on this by looking at that question about Billy Graham.  Will Billy Graham be saved, even though he is not Catholic?  I think many people, including many Catholics, would say, “Oh, absolutely.  What a good and holy man Billy Graham is.  He obviously loves Jesus. Look at all the revivals he’s done in his life.  Look at all the people he has brought to Christ.  Surely Billy Graham is on his way to Heaven!”  And I believe anyone who thinks that way is doing a great disservice to Billy Graham.

Why do I say that?  First of all, as already mentioned, it is not our place to judge.  Second of all, do we have all the facts with which to make such a judgment?  Have many people come closer to Christ because of Billy Graham?  Undoubtedly so.  But, have many Catholics left the Catholic Church because of Billy Graham?  We cannot be sure, but for the sake of argument, lets say that there are Catholics who have left the Catholic Church because of Billy Graham - I would be willing to bet that many have, whether he knowingly pulled them out or not.   Which would mean, while he has brought some closer to Christ, he may have actually helped to pull some away from Christ.  For any Catholic who leaves the Eucharist has moved away from Christ.

Also, Billy Graham is a very intelligent man and a very learned man, so it is reasonable to assume that he is aware of what the Catholic Church teaches - about the priesthood, about the Sacraments, about Mary, about the Pope, and so on.  Yet, since he isn't Catholic, he quite obviously rejects those teachings and he quite obviously rejects the authority of the Pope and the Church.  Jesus tells His disciples, “He who rejects you, rejects Me,” (Luke 10:16).  Is Billy Graham rejecting Christ by rejecting the Church founded by Christ and by rejecting those who have been appointed to lead the Church of Jesus Christ?  We are not in a position to know the answer to that question, but these are all questions we need to ponder before we canonize the man.

So, why do I say it is a disservice to the man to believe he is well on his way to Heaven?  Because by doing so, we are essentially saying that Billy Graham is just fine, thank you, without the Eucharist, without the Sacrament of Reconciliation, without the Communion of Saints, without the priesthood, without recognizing Mary as his mother, and so many more treasures of the Catholic Church.  So, since we assume he’s just fine as is, we assume there is no need to try and evangelize him.  And that is doing him a disservice.  That’s why I said at the earlier that asking whether or not Billy Graham (or anyone else) is saved, even though not Catholic, is the wrong question to ask.  The question we should be asking is: “Would Billy Graham have a better chance of being saved by receiving the Eucharist?  Yes or no?”

That is the proper question to ask about Billy Graham, or about anyone else who is not currently Catholic.  The answer to that question, is “Yes!”  Everyone who is not currently receiving the Eucharist would be better off by receiving it.  So, our question regarding the non-Catholic should not be: “Are they saved” - that’s a question that is beyond our pay grade - our question, rather, should be: “Would they have a better chance of being saved by receiving the Eucharist?” Since the answer to that question is, “Yes,” then the next question we need to ask is: Are we are doing everything we can to bring those who currently do not receive the Eucharist into the Catholic Church so that they, too, may become “partakers of the divine nature,” (2 Peter 1:4)?