Entire Doctrinal Structure Of The Church At Risk Of Collapse? 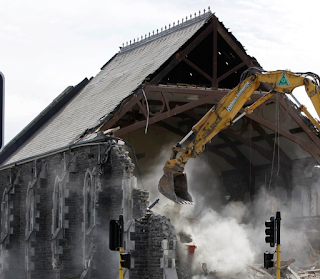 A controversy of great magnitude is raging in the Catholic universe right now. It centres around the papal document Amoris Laetitia and threatens even to create a schism in the Catholic Church. I contend that widespread neglect of the traditional doctrine and discipline of the Church since Vatican II has paved the way for this crisis and, for decades, nowhere has this been more illustrative than in the refusal of Bishops to discipline pro-abortion public sinners, especially politicians. I would go so far as to suggest that this long term failure by Bishops has created a laissez faire environment and actually set the stage for the attack upon marriage and the family which we are currently witnessing. Either Canon 915 is to be taken seriously since it governs the worst forms of abuses of the Holy Eucharist or, if not, the Eucharist is not what Catholic teaching claims; in which case the entire doctrinal structure of the Church collapses.

Clearly, Dr. Edward Peters sees the situation in a similar light and is sounding the warning by pointing to the divine law roots of Canon 915. Here is the introductory paragraph from his post of today’s date.

For several years I and others have argued that the question of admitting divorced-and-remarried Catholics to holy Communion turns primarily on Canon 915 (which norm, against a backdrop of canons protecting the right of the faithful to access the sacraments, sets out a minister’s duty to refuse holy Communion under certain conditions). Asserting the importance of Canon 915 in this Communion discussion, however, has been an uphill battle as virtually none of the official documents central to this debate—including Amoris laetitia,the Buenos Aires letter, the Maltese directives, the German episcopal conference document, and several others—so much as mentions Canon 915, let alone do they recognize that this canon directly regulates the sacramental disciplinary question at hand.

The full posting is here. It deserves a full reading.


Unless the laity rises up—speedily—and demands unreserved fidelity from their priests and Bishops, we are approaching a meltdown, at least in practical terms, of the One True Church of Jesus Christ. God help us, we are in an abyss!
Posted by ELA at Monday, October 09, 2017 1 comment: