The Challenge of Islam: A Christian Perspective 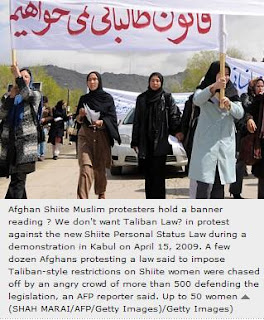 I greatly respect Dr. Mohler and he always seems ready to confront the current issues of the day, regardless of whether they touch on politics or theology.

In this case, he introduces his thoughts with this statement:

President Barack Obama has put the issue of Islam front and center on the international stage. His visit to Turkey, and his very public statements to the Muslim world, have raised a host of questions at home and abroad.

Dr. Mohler goes on to explain in detail what these "host of questions" might be and I invite you to read his article and benefit from all his insights. If you'd like a quick summary, I think his concerns are best expressed in the following paragraphs:

I criticize President Obama, not for stating that America is not at war with Islam, but for failing to be honest in clarifying that we do face a great civilizational challenge in Islam. Islam is, in effect, the single most vital competitor to Western ideals of civilization on the world scene. The logic of Islam is to bring every square inch of this planet under submission to the rule of the Qur'an. Classical Islam divides the world into the "World of Islam" and the "World of War." In this latter world the struggle to bring the society under submission to the Qur'an is still ongoing.

And then finally his conclusion:

I can agree with President Obama that Islam has produced cultural wonders, but I have to see it more fundamentally as a belief system that is taking millions upon millions of persons spiritually captive - leaving them under the curse of sin and without hope of salvation.

For Christians, regardless of nationality, this is the great challenge that should be our urgent concern. Our concern is not mainly political, but theological and spiritual. And, all things considered, Islam almost surely represents the greatest challenge to Christian evangelism of our times.

Dr. Mohler's comments can certainly be termed counter cultural but they urgently need to be stated in our day. Jimmy Akin wrote a piece entitled The Catechism on Islam in This Rock in 2002 trying to clarify Catholic teaching on Islam, particularly in light of Vatican II documents. It's a good summary considering his focus on Vatican II.

A more classical expose on Islam can be found in an article written by Michael Forrest on scripturecatholic.com. In ISLAM AND CHRISTIANITY: TWO RELIGIONS OF PEACE? the author issues a series of warnings about Islam, including the following:

Considering the violent beginnings and spread of Islam, one may hard pressed to discount the current violence as an "aberration" or perversion of Islam. A reasonable argument may be made of just the opposite, it would seem that those Muslims who support religious freedom and tolerance today are at odds with their own prophet, holy book and history. We all ought to pray that Muslims one day reject the violent essence and genesis of their faith and make it truly peaceful. Even more, we ought to pray for the intercession of Our Lady of Fatima, that they come to accept Christ, Who is true peace.

Forrest also tries to set the record straight on Islam's view of women and contrasts it with that of Christianity.

It is particularly disconcerting when the so-called “politically correct” among us, especially the feminists, praise Islam. If they find Christian society unfair to them, they ought to look a bit more closely at Islam:

Islam: "Men have authority over women because God has made the one superior to the other, and because they spend their wealth to maintain them. Good women are obedient...As for those from whom you fear disobedience, admonish them, forsake them in beds apart and beat them." (Women, 34)

Christianity: "As the Church is subordinate to Christ, so wives should be subordinate to their husbands in everything. Husbands, love your wives, even as Christ loved the Church and handed himself over for her to sanctify her; so husbands should love their wives as their own bodies." (Ephesians 5:25-29).

As opposed to Islam, we must also remember that Catholicism celebrates a woman as the highest created creature, the Mother of God, Queen of Heaven and Earth, the Blessed Virgin Mary. I suggest reading Islam Revealed by Dr. Anis Shorrosh, The Life and Times of Muhammad by Sir John Glubb and Answering Islam by Geisler and Saleeb if you want to learn more.

This is obviously a very relevant point in relation to some of today's news headlines:


Women protesters against 'marital rape' law spat on and stoned in ...

Times Online "Women protesting in against a controversial new law were pelted with stones, jostled and spat on today as they held what is believed to be the first public demonstration calling for equal rights for women in recent Afghan history."

In an editorial I wrote last year for our local newspaper, I stated:

We as a nation once declared and confessed Christianity to be religion's supreme path, a sure road to heaven through Christ, "…the way, the truth and the life." This same Christ warned, "No man comes to the Father except through me."

We once believed that foreign lands (including those of Islam) could sustain a peaceful, civilized culture and free and democratic process only by embracing a Saviour and Christian truth delivered through zealous missionary activity. Now, spiritually exhausted and corrupted, we and our Christian allies rarely mention missionaries yet expect the same outcome from military troops fighting a "war against terror" on Islamic soil. Far better to die for Christ and the Gospel in Kandahar or Baghdad than to die in a war designed to change no one's heart.

all things considered, Islam almost surely represents the greatest challenge to Christian evangelism of our times.