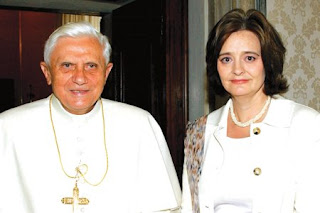 The Times of Malta last week published a television interview with Cherie Blair, wife of former British Prime Minister Tony Blair, in which she once again flouted Church teaching on condoms and contraception.

Here’s a clip of the highlight of the interview. Go here for the full video.

Ms. Blair’s is a high profile history of dissent and collaboration with the culture of death. Yet many in the Catholic hierarchy, as far away as , are quite comfy with her presence and offer her platforms with which to bewitch and poison the minds of listeners. Nevertheless, Cherie Blair is not the enemy.

What then can account for such scandal? In a word, modernism.

It’s the elephant in the closet. And it’s an elephant which, despite its enormous size, goes virtually unnoticed or ignored. A host of other secondary evils are blamed for the current sickness in the Body.

What is the solution for this pervasive evil which a hundred times daily pierces the heart of the serious minded, faithful Catholic? In my opinion, the only solution is a return to orthodoxy and tradition by means of a New Offensive.

Pope Benedict XVI is leading us in the New Offensive, I believe. And the spearhead of the New Offensive is the restoration of the ancient liturgy, the “Mass of the Ages,” to its rightful place in the life and practice of .

Cherie, do you know Latin?

Tony Blair has given an interview to the gay magazine Attitude in which he calls for Pope Benedict to rethink the Church's "entrenched" attitude on homosexuality. Well, the Pope would rather like Mr Blair to rethink his entrenched support for abortion, but he hasn't done so, has he?

More here in The Independent and on Christian Post.

Tony and Cherie Blair are two Catholics who are representative in their thinking of multiple millions of today's Catholics.

Your glorying is not good. Know you not that a little leaven corrupteth the whole lump ? I Cor. 5:6