"Canadian religious leaders were joined by Prime Minister Justin Trudeau and other dignitaries at a commemorative high Mass at Notre Dame Basilica in Montreal May 17 to mark the founding of Montreal 375 years ago as a Roman Catholic religious colony." 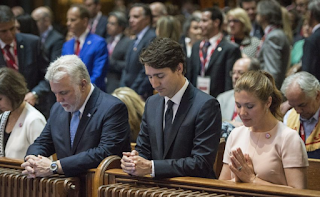 Yes, this post involves an event that occurred over two months ago but nevertheless it is hardly old news. It may, in fact, prove to be one of the biggest stories in our nation's Catholic history. Most sincerely I regret the fact that I was not in attendance at that Mass. For inexplicable reasons, even though I receive daily newsfeed alerts on the whereabouts and works of Canada's number 1 public sinner, I was unaware until the last moment of the Prime Minister's role in that event. Had I been sufficiently informed beforehand, most certainly I would have traveled to Montreal to attend and to safeguard, if warranted, the Holy Eucharist from desecration. I imagine, in retrospect, I would have been preparing myself, at just the correct moment, to suddenly stand from the balcony and shout out loudly, "Sacrilege! Sacrilege! Sacrilege! Justin Trudeau is a public sinner! He must be denied Holy Communion in accordance with Canon 915! A pox upon any clergyman in this building who would dare to commit sacrilege by handing over the Body and Blood of Jesus to one of His enemies!" 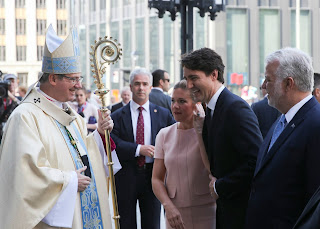 But alas, I was far from Montreal when I got the news that, only an hour ago, Public Sinner #1 had stepped forward and been served the Holy Eucharist! As I reflect upon that I still wonder why no other Catholic in Canada had managed to beat me to the punch. Surely upon learning of the Prime Minister's attendance, some other Catholic would have already imagined the exact same scandalous outcome. But no such rigid fundamentalist was in attendance.

Then again, what of the media, especially the Catholic media? If anyone had been apprised of the event surely it would be someone from LifeSiteNews or the Catholic Register. Why were they not busy in advance getting the word out to some faithful Catholic who would undertake the holy and courageous mission of defending Jesus in the Most Holy Eucharist? Canada is a big nation of over 34 million persons with 38% of them being Catholic. Why then was there not even one Catholic knight available for such a mission? Ask yourself that question. 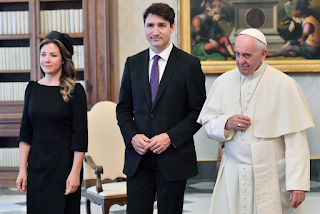 After you've meditated upon that mystery, then consider that the Basilica, which holds about 4000 persons, had a large crowd in attendance, many of whom were the most influential clergy and laypeople of Canada. Not one of the thousands were distressed sufficiently to rise from their seats when Trudeau stepped forward for Holy Communion or to make a public comment afterwards to protest the desecration that took place that day.

Why in fact did the Catholic Register, owned by the Archdiocese of Toronto, write their report of the event absent entirely of even one negative remark or criticism, without the slightest reference whatever to official Catholic teaching? From the Register's 'About' page I highlight a couple of statements.


Over the decades, the Catholic Register has been in the forefront of public debates concerning the Church. Whether it be education, military conscription in wartime, the battle against poverty or human rights, Register pages have been a forum for discussion and presenting the Catholic viewpoint.

Today The Register tries to present a broad spectrum of views from within the Catholic community, as well as views from those outside the faith which would, in the opinion of the editor, help Catholics better understand their world.

How peculiar indeed! But of course Cardinal Collins, the Archbishop of Toronto, was in attendance at the Mass in question. 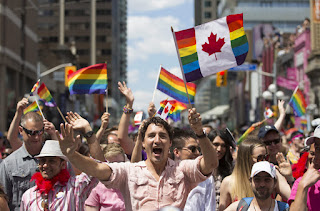 Why, pray tell, has there been no followup from LifeSiteNews, interviewing other Bishops or Priests who attended the event? Why drop the story like a hot potato? After the tragic and scandalous reign of Prime Minister Pierre Trudeau and further decades of leadership by pseudo-catholic Prime Ministers I thought those representing faithful Catholics would have learned something about push-back. Could it be that this is simply another instance of LifeSiteNews being pressured to silence by their cozy friendship with Archbishop Prendergast of Ottawa, who also had a front row centre view of the Montreal sacrilege which took place? 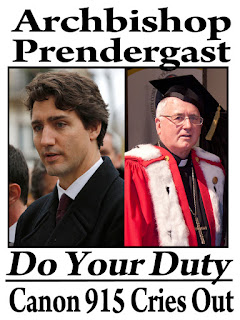 Yes, indeed, a watershed moment recently occurred in the history of Catholic Canada. The leaders of Christ's Catholic Church chose sacrilege over duty and calling. A few faithful Catholics in Canada might have held to a slim hope that the future of Catholicism in our nation had taken a turn for the better over the last ten or twenty years thanks to what some claimed to be a revived clergy and hierarchy. But any such hopes have been altogether dashed. The future for Canada can only be bleaker.

I previously summarized the travesty pictured above:

Just weeks ago we witnessed the greatest scandal to take place in Canada’s recent history----made all the worse because it was televised live on national TV. At a high Mass at Notre Dame Basilica in the midst of gala celebrations for the 375th anniversary of the founding of Montreal, Justin Trudeau, a renegade Catholic, shared in Eucharistic Holy Communion. Prime Minister Trudeau defies the law of Christ pertaining to practically every social evil currently plaguing Canada, including abortion, contraception, divorce, euthanasia, homosexuality, same sex marriage, and gender theory. Nevertheless, he stepped forward to receive the Body and Blood of Jesus Christ and was enabled in his act of sacrilege by none other than the Archbishop of Montréal, Christian Lépine, a Bishop who later justified his scandalous behaviour by characterizing it as a “gesture of hope.”

The warning from Holy Scripture is clear:

Since that blasphemous moment in Montreal not one of the more than 30 influential Bishops and 400 priests present, including Archbishop Prendergast, has spoken up to condemn the evil perpetrated at that event or to defend the teaching of Christ.

This will not be the last you hear about this dastardly "commemorative" Mass.

Bishops have fostered an altogether different religion in Canada and the gambit has been swallowed hook, line and sinker. How many will acknowledge this devastating reality?

You have nailed it my friend! Cowards and sell-outs remain silent. I have it on good authority that John Henry Westen believes that + Prendergast is "likely the best bishop in Canada". Well, obviously he is not good enough by a very long shot.

You are correct; +Prendergast is refusing to apply canon law. We saw the horrible spectacle of Thomas Rosica, CSB, tweeting out a photo of Justin Trudeau kneeling in the Sistine Chapel. Rosica has time and again showed support for Trudeau. he is able to do so by +Prendergast remaining silent and thereby mudding the waters regarding Trudeau's crimes. In the process, Lifesitenews (already de facto an American news outlet. They have abandoned Canada to hold all their "fund raises" down there) loses credibility as it picks and chooses its villains. All of this plays into the hands of the wreckers of the Church, Society and Canada.

I did a series of postings on Archbishop Prendergast's failure to apply Christ's law in respect of public sinners. One of those postings addressed the claim of some of my critics who believe ++Prendergast to be our "best Bishop." Here's the link: http://signofcontradiction.blogspot.ca/2015/11/archbishop-prendergast-resign-part-3.html
Note the near complete silence in Canada from all quarters, especially within the Church, regarding the Montreal scandal. They have been intimidated by the sheer force of universal heresy among Canada's Bishops. Now that Trudeau has publicly faced down the Bishops at Notre Dame Basilica, he will forever be their master.

No problem. No sacrilege. Novus ordo sacraments are invalid, except baptism and matrimony. Trudeau only got a novus ordo cookie.

Too bad he's not a Bishop. Boy, would Canada
be cleaned up in a hurry if that were the
case!

Keep on speaking the truth, Eric!